After much thought and discussion the other night we came up with our master plan! We need another day in Antequera. We also sketched out a plan for the rest of the trip. We know we want to be home around 20th March and that means a ferry crossing around 10th or 11th March (best price determines that nearer the time). This in turn means we want to be in France around the end of February to allow 2 weeks to get across France with out rushing and still have some spare days. So we have about a month to visit Portugal and get across the north of Spain. Enough time to enjoy ourselves but not so much time that we can afford to stop anywhere for more than a few days.

Our extra day in Antequera was to allow us to go and see El Torcal Natural Park. Bernard, our German neighbour, came back from there the other day enthusing about the place and the wildlife. This is an area of outstanding limestone “karst” scenery just below the summit of the tallest mountain behind Antequera called El Torcal.

In the end we left in the afternoon having been busy with various jobs in the morning not least of which was servicing Bertie. Filling up with water means we can have long hot showers tonight – a real treat. It was about 10 miles to the top car park at El Torcal but it was a slow and steep climb up to 4,000ft. It was worth the trip out just for that road with its incredible views.

We had planned to do the full 2.5km marked footpath but in the end opted for the shorter “easy” path. The going was really rough and rocky and Eileen found it very hard to judge her footing. We did catch a glimpse of one ibex but it was rather distant. The place was busy with tourists and with bus loads of school children so we expect these shy animals had retreated to the quieter areas. There were plenty of signs of them around the path we walked so we know that have been around here earlier. We watched some huge raptors soaring above the valley and we think these might have been either griffon vultures but more probably golden eagles or bonelli’s eagles – in any event a wonderful site to see four of them circling in the sky. 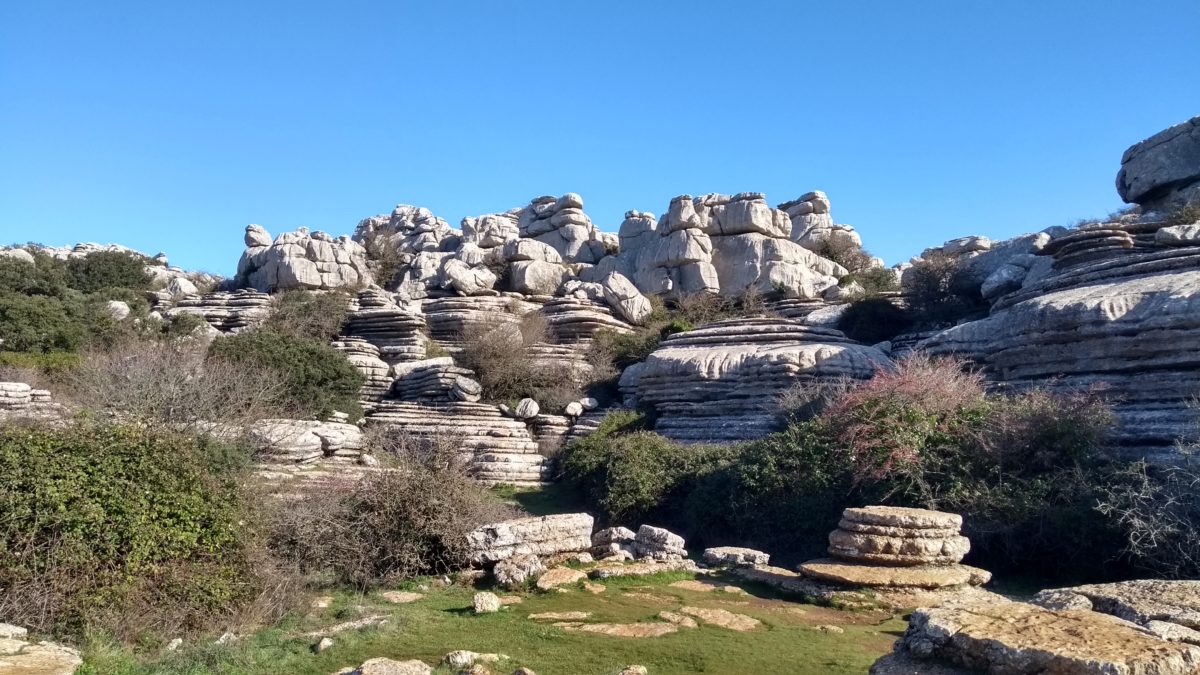 The sun was shining strongly and whilst we were in the sun we were warm but one section of the path took us below a high cliff and here it was quite chilly with even a few remains of frost on the ground which had not seen the sun all day. We are at 4,000ft after all.

We got back to Antequera as the sun was setting and we parked in the upper section of the car park where we hoped Bertie would get a bit more sun in the morning.

Thursday morning we were up in good time. A busy day today as we need to service Bertie again (after our showers!) and make sure everything is sorted as the next two nights will be on car parks with no services. Then off to see the Dolmens. Antequera is really proud that their Dolmens have been recognised and given World Heritage listing. These large burial mounds and chambers date from the late Neolithic (aka “new stone age”) and the Chalcolithic  (aka “copper age” which is a bit later) periods. There are three dolmens of which two are close together and a third one is a couple of miles away. We have seen many burial chambers, barrows and cairns of all shapes and sizes but we had never seen anything on this scale. The stones used are huge with the largest weighing over 200 tons and it must have taken enormous effort to build these monuments with the limited technology of 4 – 5,000 years ago. Menga Dolmen is the largest and we were told by one of the guides that this is the oldest and biggest dolmen in the world which is quite a claim. However having seen it with its unique double aisle with huge stones supporting the centre of the chamber, we can believe that claim.

We took our time exploring these amazing places and were back on the road about midday. We had a short stop for coffee high in the mountains beside a fountain although the location was marred by the large motorway right beside us! From here it was a long drop down to Malaga through several tunnels and the along the coast a little to our chosen stopover on the edge of Torremolinos. Most of this was on that same motorway and then on our old friend the E15.

The stopover tonight is an unoffical area used by quite a few motorhomers. It is one of those areas we often see in coastal developments where there was a plan to build some houses and they built the roads and put in the services but have never got around to building anything so there are a number of short cul-de-sacs opening off an equally empty through road and just back from the sea front. Each of those five short roads has room for 2 or 3 motorhomes. The downside is there are no services except rubbish disposal.  On the subject of rubbish disposal we are intrigued that Spain seems to have no rubbish collections from individual premises – we have seem almost no wheely bins at all. What you do see everywhere is large bins for various kinds of waste – these are grouped together on almost every street. They are emptied at night most nights. It works really well for us as there is always somewhere close by to put both rubbish and recycling. I am not sure how well it works for residents as they have to carry everything to these disposal points.

Tomorrow we will drive about 50 miles down the coast to another car park this time on the edge of the small town of Estepona which is half way to La Linea de la Conception (the Spanish town right next to Gibraltar) where we will stay for a few nights whilst we visit the “Rock”.