We are still here! In the end we decided to stay for a couple more days in order to have time to explore the town of Gandia and especially the Ducal Palace of the Borjas (Italian spelling is Borgias – same family). We had read about this and thought it looked interesting. Gandia is 4.5kms away and there is an easy cycle path through the orange groves and along an old railway track now converted to a cycle path.

We had quite a slow start on Sunday morning and by the time we actually made it to Gandia and the Ducal Palace it was getting close to the lunchtime closing and they had a big group tour in progress. Considering it was a Sunday the town was quite busy and the Ducal Palace was heaving. We decided to give up for today and come back on Monday. Instead we had a wander around the old town (pushing our bikes so that we had time to look around us). Coming out on to one of the bigger boulevards we heard a drum thumping in the distance and then we heard a brass band playing. We wandered across the road to see what was going on and we found a religious procession coming along. Today is the feast of the Solemnity of the Immaculate Conception so we assume this is something to do with that. 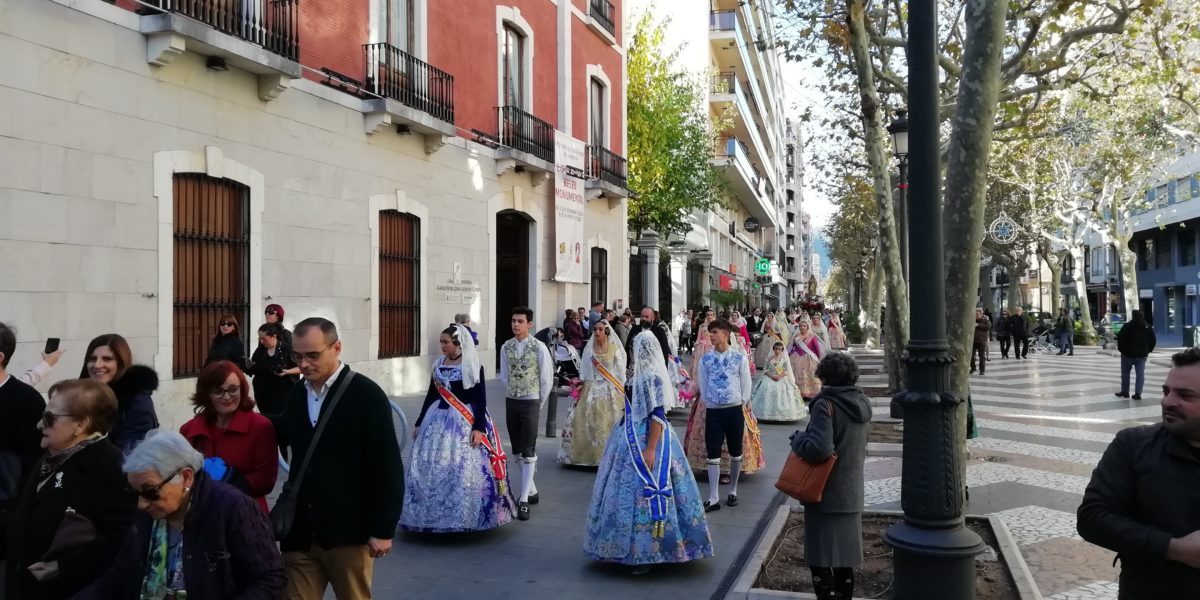 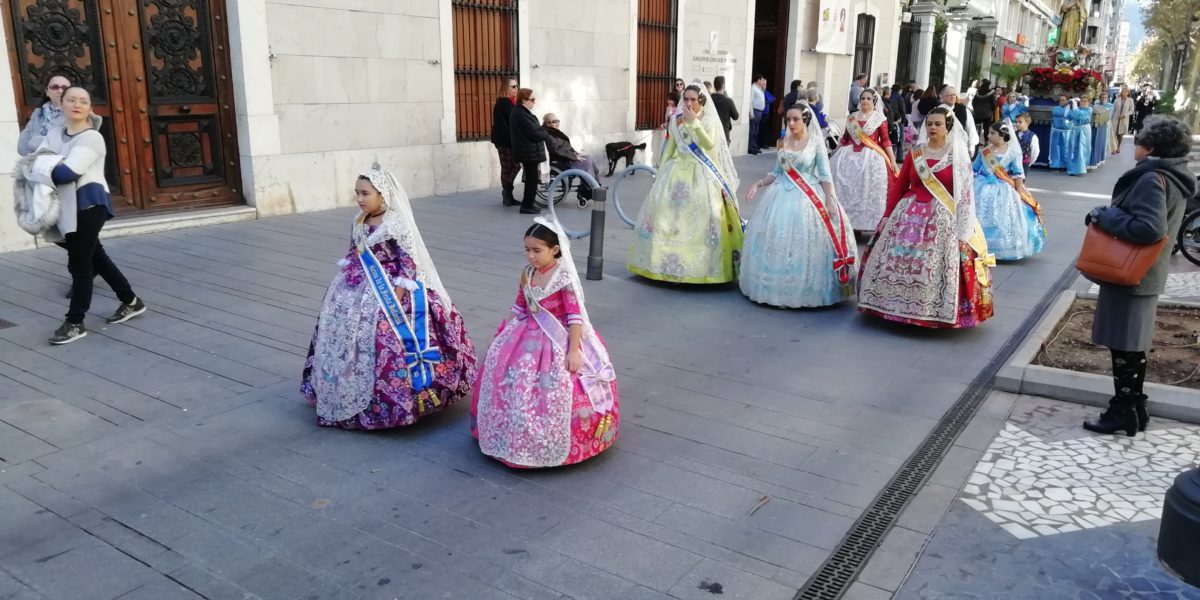 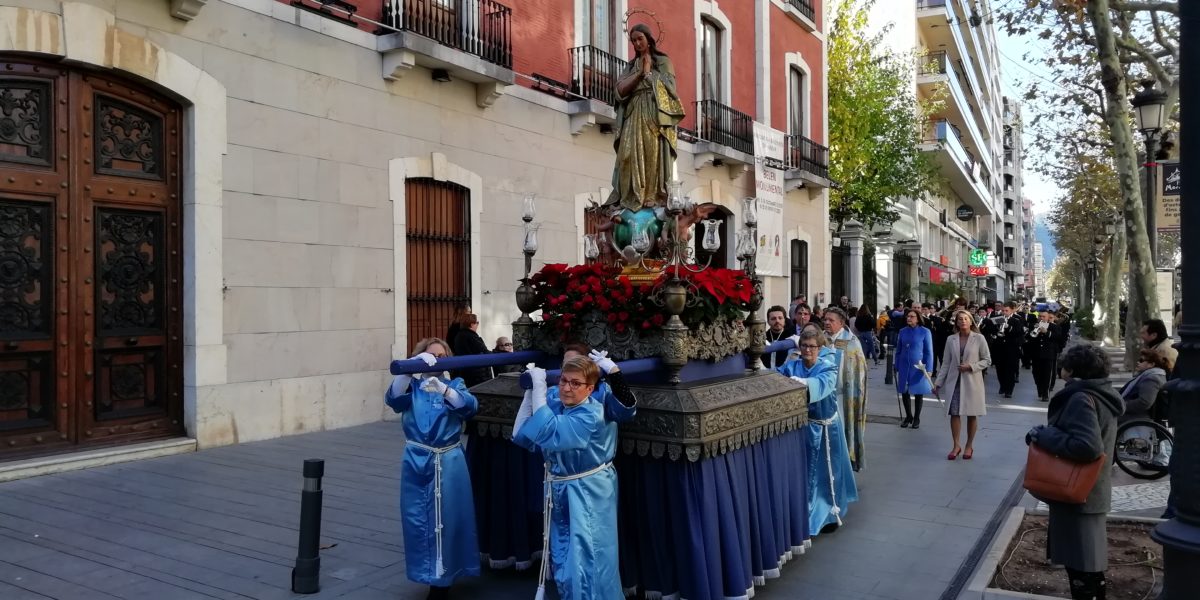 We treated ourselves to Menu del Dia (Menu of the day) in the main square by the church. We really struggle with Spanish menus and Google Translate is usually almost as confused as we are. We settled on a small cafe with a short menu that we could understand and which seemed to be largely veggie choices. The meal was OK but portions were tiny and there were no side dsihes at all and thus no veg or salad. What we had was very nice but we decided to seek dessert elsewhere. This turned out to be a cafe and bakery just up the road that was advertising Hot Chocolate. This was nothing like any kind of hot chocolate we had had before. It was rich, dark and quite thick and infact was more like a chocolate sauce.

We duly tried again on Monday – in fact we got up especially early to make sure we were at the Ducal Palace in good time. Well that was the plan and we did get up just as the the sun was rising (ie about 8:15 am) somehow the time slipped away after that but we arrived at the Ducal Palace after a lovely ride through the orange groves and across the Rio Serpis (named for the serpentine route it takes!) on the old railway bridge.

This time the Ducal Palace was almost empty. The custodian kindly let us leave our bikes just inside the doorway and issued our “senior” tickets and our english audio guides and off we went. The rooms available to view are on the second floor and are the grand reception rooms and chapel etc. These are all very grand and ornately decorated. This was the home of the Borja family from the C14 to C17. The Jesuits bought the palace in the C19 and restored it extensively and made it something of a shrine to Francisco Borja 4th Duke of Gandia who resigned his worldly wealth and became a Jesuit monk himself. Although the spelling is different this family is the same as the (in)famous Borgias in Italy.

We had the palace almost to ourselves and we could take our time and enjoy the paintings and ceramics at our own speed which was so much nicer that the hustle and bustle yesterday.

After all the culture Eileen felt she needed to check that her memories of the hot chocolate were accurate and so we went back to the litthe cafe we had visited yesterday. This time I had fresh squeezed orange juice while Eileen checked the hot choc really was as good as she remembered (it was) and we had some hot pizza type snacks. All very nice and not expensive. It is lovely cycling here, the traffic is fairly light, the cycle paths are good and the whole area is nice and flat! This is our kind of cycling. We think this is the best time to see Spain, the sun is warm and bright but not oppressively hot and the air is nice and cool.

Tomorrow we really are moving on!